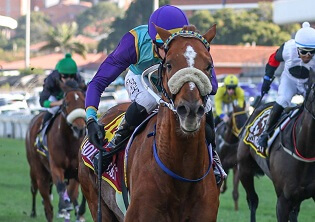 Jack Milner: Declarations for the Hollywoodbets Durban July over 2200m at Hollywoodbets Greyville on Saturday 2 July close on Monday morning and at this stage there are 33 runners vying for the 18 spots in the final field.

While only 18 horses will run, there will also be two reserves in case of any late scratchings.

During the week trainer Paul Peter scratched Netta, Flying Bull, Naval Guard, Sprinkles and Great Affair from the Grade 1 race, which only leaves him with Astrix, winner of this year’s Premier’s Champions Challenge.

In addition, Airways Law, impressive winner of the Grade 3 Cup Trial, has been supplemented into the R5-million race by trainer Andre Nel.

The son of Legislate has now run eight times for five wins and two places.

Some jockeys have already been announced. Muzi Yeni will ride Safe Passage for Mike de Kock with Warren Kennedy on Aragosta. Callan Murray, who is now based in Australia, will be back in South Africa on a busman’s holiday and has picked up the ride on Grade 1 Gold Challenge winner Al Muthana, also for De Kock.

Grant van Niekerk will ride Linebacker, Richard Fourie is on Pomp And Power, Aldo Domeyer on Do It Again, Piere Strydom on Belgarion and Craig Zackey on Hoedspruit.