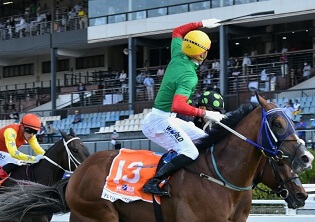 Flying Carpet to take off

Jack Milner: Flying Carpet has been running against some of the best horses in the country and in fact, of his last 10 races, seven of them have been in Graded races.

While he only managed to win one of them, Sean Tarry’s charge was rarely far off the leading group.

The race he did win, though, is one of the most sought after in the country, the prestigious Grade 1 Summer Cup over 2000m at Turffontein last November.

His last two runs were also in Grade 1 company. The first was the Wilgerbosdrift HF Oppenheimer Horse Chestnut Stakes over 1600m, which came following a three-month break. The distance was probably a touch short so with that in mind, he did well to finish fifth, beaten 5.25 lengths by MK’s Pride.

His next assignment was the Premier’s Champions Challenge over 2000m where he went off at 40-1 but defied those odds to finish fourth, just three-length behind Astrix.

On Tuesday the four-year-old son of Judpot takes quite a drop in class when he lines up in Race 4, the 4Racing.TV Progress Plate over 1800m at the Vaal.

This looks an ideal race for Flying Carpet to notch up his fourth victory and he should be hard to beat. He will have Calvin Habib, who rode him to victory in the Summer Cup, in the irons and right now he and Tarry are in hot form.

The only problem is that Flying Carpet has often found something to beat him, even though he has finished in front of almost all of his opponents in recent features, and that is a slight concern.

Perhaps the main threat will come from Paul Peter-trained Ocean Warrior who has won twice and placed second twice in his seven runs since joining the Paul Peter yard last year.