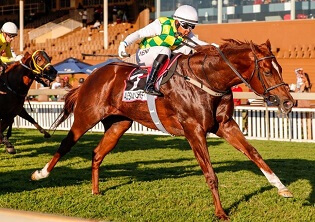 Corrie the chief at Scottsville

For many, Kimberley and Flamingo Park Racecourse was the backwater of South African racing. For the sick, lame and not so fast this was often their last chance saloon.

Because of what they were dealing with, Flamingo Park threw up a generation of trainers who had to deal with all these issues and to get their so-called throw-outs sound and fit to race.

When Flamingo Park closed down, it was the end of a livelihood for many, trainers, grooms and racecourse staff.

Corrie Lensley packed up and headed for Cape Town, a venture that did not last the distance. He then relocated to the Vaal where he has slowly worked his way up a ladder that reached a pinnacle at Hollywoodbets Scottsville on Saturday with Alesian Chief lifting the Golden Horse Sprint to give Lensley his first Grade 1 victory.

Lensley was not on course to lead in his winner, his son getting married on the same afternoon, but no doubt any nuptials will have been put on hold to watch the race.

Muzi Yeni had no hesitation in going forward out of the gate in spite of most of Alesian Chief’s best form being over 1000m. “I got a flyer out of the gate; he’s got great gate speed and I controlled the race from there. It was just for me to be patient on him. He is more like a 1000m horse so you have got to be patient with the 1200 up the hill.

“I waited and waited, and I saw someone flash up on my inside, I thought it was Khumalo, but I had some aces up my sleeve and was able to find a little bit more,” Yeni confirmed post-race.