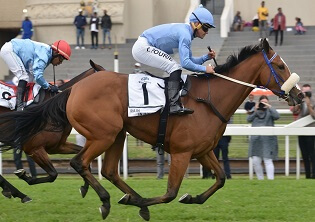 Jack Milner: Rain In Holland won the Grade 2 Wilgerbosdrift SA Oaks at Turffontein on Saturday and in doing so became the fifth Triple Tiara champion.

The Sean Tarry-trained filly was pushed all the way to the line by Light Of The Moon but in the end class prevailed, as did Rain In Holland, ridden once again by Richard Fourie.

“I’m just relieved that it’s gone well and that she’s in the number one box,” said Tarry.

“The race was run at a nice honest tempo.”

“I never really had any anxious moments. Richard gave her a very confident ride. I’m just happy that’s it’s actually over. We were never concerned about her actual ability or the race itself. It was just a matter of whether everything would go right. Fortunately, it has, and she has done the job.”

“It’s easy to talk about the race afterwards, but the bottom line is, it was never in doubt. It was always just a canter.”

“We have to see where we go from here, but I would guess that we would have a serious look at the Woolavington. Maybe one or two others as well. For now, let’s just enjoy the moment.”

Fourie added it is always a pleasure for him to come up to Joburg and ride these Classic horses. “I got nice cover which I said for me was always first prize, because I would rather have her follow something than see daylight for the full trip.

“When we came into the straight the tempo was nice and I made an early move with momentum. She didn’t hit a flat spot as she did with the mile and the 1800m.

“Then she changed legs and the rest is history.”