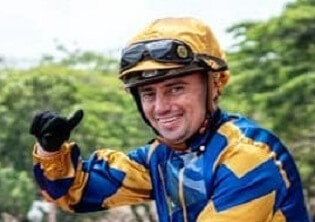 JP makes his return in PE

After a stint in Singapore talented jockey JP van der Merwe has returned to South Africa and will be riding at Fairview on Tuesday, when they race on the Polytrack.

He was handed a one-year suspension in Singapore which was reduced to six months on appeal, and he will no doubt be keen to get back among the winners as soon as possible.

Gavin Smith has given him some rides, and a couple of the bones Smith has thrown him, actually have some meat on them so let’s go through his four carded rides.

In Race 1 he rides four-year-old filly Pianta, who is making her local debut and will taste the Polytrack for the first time.

Her last two starts brought about some poor results, but it is worth noting the blinkers she wore for both of those runs have been discarded and this daughter of Pomodoro was not beaten far in her four previous starts.

She is definitely one to include in Trifectas and Quartets.

Psycho King in Race 3 is his next ride. The Potala Palace gelding was not beaten far in his local debut over 1200m.

Clearly that trip was on the sharp side so the step up to 1600m should suit and from a good draw he does have a winning chance in a tough race, where there are many form runners.

Another JP ride that must be included in large exotics.

Probably his best ride of the day is in Race 5 with Senescence.

This mare has been very consistent since joining Smith’s yard and although it has got tough for her to overcome her recent penalties she should still be right there at the finish.

A wide draw will not make it easy, but she does also not appear a difficult horse to place.

Blinkers can sometimes bring about good improvement in horses and his ride, Sister Freda, seems to suggest that was the case and is another to consider when she runs in Race 7.

Once again, a wide draw could be a challenge.

The best bet on a competitive card looks to be Wildest Dreams in Race 2, a Maiden Plate for fillies and mares over 1600m.

Formerly trained in Cape Town by Justin Snaith, went off an odds-on favourite when brought to Fairview last month where she raced over 1900m on the turf.