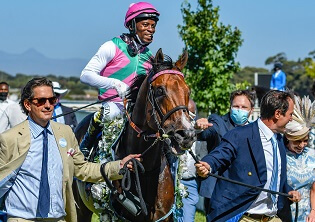 Jet Dark joined an elite list of horses at Kenilworth on Saturday when he won the R1.5-million L’Ormarins Queen’s Plate for the second successive year.

Ridden by S’manga Khumalo, the Justin-Snaith-trained son of Trippi stormed down the inside rail to win the Grade 1 race by 2.25 lengths.

Remarkably, last year’s champion found little betting support and was allowed to drift from an opening call of 9-2 to go off at 10-1.

Second place went to Kommetdieding, who touched off TAB favourite Rainbow Bridge by a head with Seeking The Stars in fourth.

“Just look at him, a beautiful animal – such a stunning individual,” an ebullient Snaith remarked about his champion.

Despite a slightly slow start, Khumalo felt he always had everything under control. “Jet Dark was so relaxed and with the pace being on, I chose to wait on him. I slapped him down the shoulder and then he really kicked.”

As expected, After The Rain, Pomp And Power and Seeking The Stars ensured the pace was brisk, with Linebacker in touch with them.

Rainbow Bridge was midfield with Jet Dark lagging behind him and in a stretched-out field, Kommetdieding was one from last.

Halfway up the straight seven-year-old Rainbow Bridge loomed up on the outside with a powerful move while Kommetdieding also made a bold rally from far back.

However, once Khumalo had Jet Dark in full cry the race was over as he romped to a third Grade 1 victory within a year. It was Khumalo who rode him to victory in the Grade 1 Champions Cup over 1800m at Greyville in July.

Perhaps the biggest disappointment was Linebacker who could only manage seventh spot, although he was only beaten 3.90 lengths.

The winner was also trained by Snaith, who had four winners at the meeting.

Successful jockey Richard Fourie was effusive in his praise for this multiple G1 winning daughter of Captain Al – now victorious in nine of 11 outings.

“She was difficult today and I needed to get sideways in the saddle to straighten her out, but she is a star and very close to my heart.”