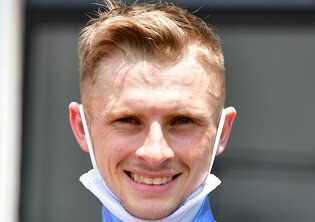 Lyle Hewitson was one of three jockeys involved in a fall during the running of the Hong Kong Sprint at Sha Tin on Sunday.

In a statement issued by the Hong Kong Jockey Club, they confirmed jockeys Hewitson, Yuichi Fukunaga and Zac Purton who were dislodged during the Hong Kong Sprint were all conscious and had been sent to hospital for further medical assessment.

“Further update will be provided in due course.

“Given the accident and the developing circumstances, the decision was made that the trophy presentation of that race and the remaining HKIR races should be scaled down, including not playing national anthems.”

They have all been assessed, are conscious and in a stable condition.

According to Hewitson’s father, Carl, Lyle is conscious and aware of Hannah (his wife) being with him. “He doesn’t recall what happened. He fractured his hip but doesn’t need surgery at this stage. He has slight bleeding on the brain but doctors think it will settle by itself.”

Hannah later confirmed Lyle had called her. “He is doing well and is very positive.

“They are going to get him something to eat and drink as they think the head is nothing to worry about.”

That clearly indicates they are not considering surgery and does not have to be prepared with “nil by mouth”.

“As wonderful as the racing was today, we also had the unfortunate and tragic circumstances in the Hong Kong Sprint, where there was an accident. Our thoughts are with the injured jockeys and we wish Zac Purton, Lyle Hewitson and Yuichi Fukunaga a speedy recovery.