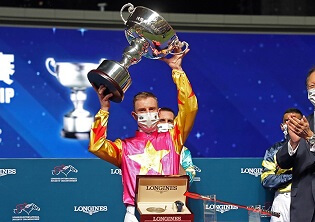 Assessing the allocation of rides after a ceremony at Sha Tin yesterday, Purton immediately identified Moore, Kawada and Lane as the most serious threats to his ambitions of a third crown.

“My first impression was that Ryan Moore had some decent rides, he seems to get good rides and good gates every year, and I thought Yuga Kawada and Damian Lane had some nice rides as well, but that might change once I look at it with a little bit more depth,” said the Australian, who represents Hong Kong.

“I like riding at the Valley so that certainly helps but like in every race, every week, you need some luck and I’ll need plenty of that. Let’s see how we go.

“It’s good to see more depth in the fields as well, so it’s going to make for an exciting competition.”

Purton leads the Hong Kong jockeys’ championship by 10 with 46 wins to Moreira’s 36 and hopes to build on that advantage when he partners Circuit Seven, Glorious Lover, Amazing One Plus and Shining Gem in the IJC.