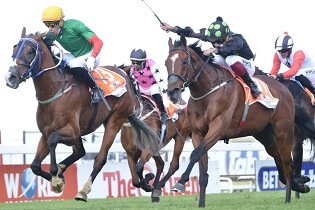 Jack Milner: In recent years Sean Tarry has been the dominant trainer in the R2-million World Sports Betting presents the Gauteng Summer Cup.

On Tuesday he added his name to the winner’s trophy of this Grade 1 race for the fifth time as 25-1 shot Flying Carpet produced the magic for the stable.

Jockey Calvin Habib delivered the four-year-old son of Judpot at the perfect moment to get the better of Majestic Mozart (17-1) by a head.

Only then followed 33-10 favourite War Of Athena who was beaten just 2.30 lengths and finished just a short head behind Johnny Hero.

It has been a tough year for most people in the industry and particularly so for Tarry, so this victory will certainly come as a boost for the entire yard.

It was also a fairy tale ending for jockey Calvin Habib who has only recently returned from a horrific injury.

“It feels like a dream,” he said after the victory. “Four months ago I fractured my back and I was off. I just put my faith in God. I said, He’s got the script written and I just have to live it. “And look where we are today.”

He particularly thanked Tarry for his support. “We hadn’t cracked a winner together since my injury, but I knew (when we did) it would be something big.

“And what’s bigger than this?”

Puerto Manzano took the field along from Bingwa, who had to work a bit harder this time to overcome his wide draw. Majestic Mozart sat in third with Golden Pheasant just behind him.

Malmoos was well placed on the fence, about three lengths off them with Astrix and Seeham on his outside. War Of Athena was next best with Flying Carpet on her inside.