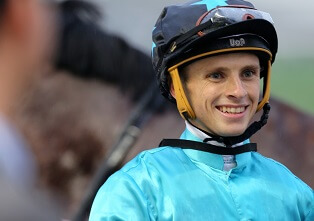 Equipped with six rides at Sha Tin on Sunday, Lyle Hewitson is eager make a swift impression on his return to Hong Kong racing ahead of the LONGINES International Jockeys’ Championship (IJC) at Happy Valley on Wednesday, 8 December.

Hewitson, 24, last competed in Hong Kong in the 2019/20 season, riding three winners before travelling to Japan, where he crowned a two-month stint with two Group 2 triumphs aboard Galore Creek and Authority.

An imposing tally of 263 winners back in his native country provided Hewitson with a third South African champion jockey title in 2020/21 and now, having completed hotel quarantine, the latest addition to Hong Kong’s riding ranks is keen to impact as soon as possible.

“I’m really excited, obviously I’ve come here with a knowledge of the racing, this time around,” Hewitson said. “Also, I feel personally that I’ve improved and matured and that’s going to stand me in good stead going forward.

“I come with a lot more confidence, a lot more experience and I’m really looking forward to changing things up and going well this time.

“It might be a cliché but they say that you learn more from failure than you do from your success. I’m not saying my first time here was a failure but it was the first time in my career that I haven’t done extremely well.

“My whole career has been really free-flowing and flying and it (his first Hong Kong stint) almost made me take a step back and realise there was so much room for improvement and there was so much I could learn and so there’s a lot that I took out of last time – mentally and physical – that I can bring to the table this time.

“There was a gap in the market with a few guys suspended, so I put myself out there and went around asking for rides and it’s great that I’ve got some support – I’m pretty happy with that.”

Beyond Sunday, Hewitson is bristling at the chance to test his skills against 11 elite riders, including Ryan Moore, Zac Purton, James McDonald, Joao Moreira and Mickael Barzalona, in the IJC.

“It’s such a prestigious event. The Hong Kong Jockey Club raises the bar when they put together these types of events and it’s fantastic to be part of it – it’s where I should be and where I want to be and hopefully it sets the tone for the rest of the season,” he said.

“He’s a relatively lightly-raced horse, he had his four-year-old campaign geared towards the Hong Kong Derby and now he seems to have come back as a little bit more of a mature horse and settled into the environment,” Purton said.

“These horses can quite often improve a lot from their four to five-year-old years, he ran well first-up and he gets his chance to go and do it again up to the mile.”