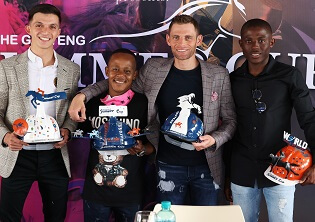 The draws for Saturday’s World Sports Betting presents the Gauteng Summer Cup proved to be the best and the worst for trainer Mike de Kock.

He was no doubt delighted that favourite Malmoos drew in pole position for this R2-million Grade 1 race over 2000m on the Turffontein Standside track but could not have been happy that filly Sparkling Water ended up on the outside of the 19-horse field.

Got The Greenlight is another strong contender for this race and Joe Soma’s charge drew in No 10 barrier, which is not all that bad over 2000m at Turffontein as they start on the long back straight.

The fact War Of Athena will have to jump from barrier No 5 will have delighted her connections and this top-class filly will have a lot of supporters. She has only once run against the colts and that was very early in her career when beaten a short head by MK’s Pride over 1400m.

Bingwa, a very easy winner of the Allied Steelrode – OnamissionMile, once again did not have the luck of the draw. He was drawn widest of all in that race and has landed No 18 this time.

The draws for barrier positions were made yesterday at a function at a restaurant in Soweto, 6876 Vilakazi St.