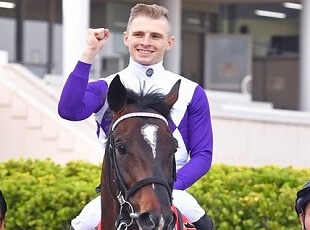 Lyle to ride in HK IJC

South Africa will participate in this competition for the first time since Gavin Lerena’s appearance in 2016.

Hewitson has been granted a licence to ride in Hong Kong until the end of the season.

The 24-year-old rider is already in Hong Kong but is still under quarantine. “I get out on the morning of 25 November, so we have not been able to settle in yet,” said Hewitson from Hong Kong yesterday.

“It will be great to get out and get going!”

Hewitson spent six months riding in Hong Kong through the 2019/2020 season, with limited success, but he went on to win scored a pair of Grade 2 races in Japan and then came home to claim the South Africa champion jockeys’ title for the third time.

So, it is a definitely older and wiser Hewitson who has returned to Hong Kong this time.

Commenting on his selection to ride in the IJC, Hewitson added. “It’s fantastic to be part of such a prestigious event and I look forward to every aspect of it.

“It’s an exciting opportunity and I will take it with both hands.”

He certainly will be taking on some tough opposition as a number of the best jockeys in the world will be in action.

The HK$800,000 (R1.6 million) IJC is a four-race competition for 12 elite jockeys, and this year’s edition features eight overseas riders and four based in Hong Kong, all battling for the HK$500,000 (about R1 million) top prize, the most lucrative jockeys’ challenge winner’s cheque in the world.