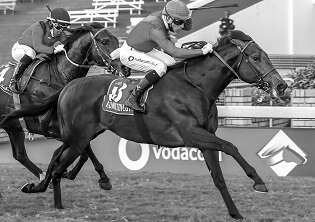 Jack Milner: Vodacom Durban July champion Kommetdieding will be making his return to the track in the Cape Mile (Non-Black Type) at Kenilworth on Saturday.

The four-year-old son of Elusive Fort turned around the form of the Grade 2 KZN Guineas and the Grade 1 Daily News 2000 in which he finished third and second respectively behind Linebacker, to beat Vaughan Marshall’s charge by 0.50 lengths in the Durban July over 2200m.

After that victory it came as no surprise that offers came from overseas buyers. There was an offer from Saudi Arabia but that fell through.

“Robin Bruss was organising the deal. There was a whole shipment of horses that were due to go,” explained Michelle Rix on Monday. “Robin did come back with another offer, but owner Ashwin Reynolds felt with the Cape season almost here, he would rather keep the horse and run him in the big features.”

The plan is to prepare the colt for the Grade 1 L’Omarins Queen’s Plate and then the Grade 1 Cape Town Met.

Rix confirmed Kommetdieding has come back well from his four-month break. “He’s doing fantastically well. He’s the most straightforward horse and very easy to train.

“On Saturday I think he will be a hard horse to beat. He could be racing against Rascallion who has finished a short head in front of him in the Daily News, but we had beaten him before that.”