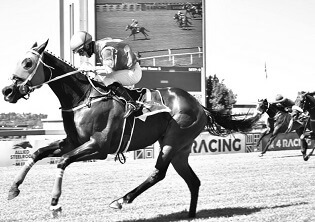 Beautifully ridden by Chase Maujean, Bingwa proved he is a top miller as he coasted to a 3.25-length victory in the Allied Steelrode – OnamissionMile at Turffontein on Saturday.

Early favourite Malmoos looked dangerous halfway up the straight but was one-paced and finished up in eighth spot, beaten 5.65 lengths, while Got The Greenlight did not produce his usual powerful finish and ended up ninth, just a head behind Malmoos. Both will come on with this run under their belts.

Bingwa is the Swahili word for champion, and this four-year-old Pathfork gelding certainly lived up to his name.

He has always been a specialist at 1600m but the concern was that he had to jump from No 15 draw. “When we discussed tactics I told Mrs Sham we were going to come out positive and take our chances,” said Maujean.

“But it was quite alarming. I never expected to get into that position. Before I knew it I saw an opening for me and I was in fourth place. I would have taken that position if I was drawn No 4.

Calvin Habib took Astrix into an early lead from Ikigai. Seeham was third on the rail with Bingwa on his outside while MK’s Pride and Warren Kennedy sat around four lengths off the leader. Malmoos was positioned on the outside of stable companion Al Muthana in midfield with Got The Greenlight and Pack Leader at the rear.