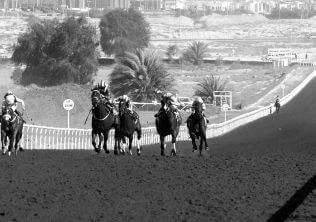 Champion trainer Doug Watson found Jebel Ali a happy hunting ground last term, highlighted by Al Tariq’s victory in the Jebel Ali Sprint (Group 3), one of his 17 winners at the Dubai track. The Dubai-based American is bringing a big team to Jebel Ali, saddling 19 horses and he looks to have plenty of strong chances of getting among the winners and starting the defence of his title with a bang.

Racing kicks off with a nine-runner maiden, over 1400m for four-year-olds and upwards. Pat Dobbs, Watson’s stable jockey, has chosen to ride the lightly-raced Express Route, one of three runners representing Red Stables.

Formerly trained by Charlie Appleby, he caught the eye on his local debut at Jebel Ali, staying on nicely in the closing stages behind Vasari. On his next appearance, he failed to build on that promise when stepping up in distance at Meydan, trailing in 14 lengths behind Al Mureib. Express Route can be forgiven that lacklustre effort, it was reported he had a minor bleed.

He can bounce back to form on the back of a 232-day break and is fancied to open his account at the fourth time of asking. The consistent five-year-old Leadership, runner-up on his last two visits to Jebel Ali, merits respect if primed and ready on the back of a lengthy absence, while the unexposed Waathig, trained at Jebel Ali by Nicholas Bachalard, is open to improvement and is one to consider in a race not many appeal.

Race 2, a 1400m Handicap, has attracted the biggest field of the afternoon with 15 declared, and looks wide open.

Law Of Peace, trained by former champion Satish Seemar, has the assistance of Tadhg O’Shea and is the most interesting runner. By Shamardal out of the Fillies’ Mile (Group 1) winner Certify, he impressed when opening his account at Abu Dhabi in February before twice finishing second when switched to handicap company at Jebel Ali. He’s very unexposed, unlike most of his rivals, and has sound claims.