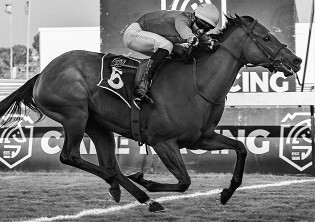 There was double delight for Drakenstein stallion Trippi as Amanzimtoti and Trip Of Fortune won Graded features at Kenilworth on Saturday.

Amanzimtoti, hooked deep for her closing surge, proved much the best in the Western Cape Fillies Championship (Grade 2) over 1400m for three-year-old fillies as she bolted home from Chansonette and Mercury Rising, with pacemaker Maria Querol tiring late to be fourth.

Dynamite can come in small packages and the diminutive progeny of ace race-mare, Beach Beauty produced an explosive stretch run to complete a convincing victory.

Amanzimtoti (33-10), sired by Trippi, has thrived between two and three years of age. A visually impressive winner of two out of her four starts going into the race, she stepped up her performance level another notch taking on Grade 2 opposition. The race shape favoured off pace closers as all the handy types that went quick early only to cave in, left the perfectly handled Amanzimtoti to pick them all off with her closing burst towards the grandstand rail. Aldo Domeyer was the winning jockey, with Candice Bass-Robinson the successful trainer on a banner day for the Milnerton- based combination.

While no match for the winner, 40-1 outsider Chansonette handled the sharp step up in class with a fine run. Andre Nel’s entry moved up sweetly to be a clear second and looks to have a bright future. Another longshot, Mercury Rising, dropped out to last from a wide No 11 draw stayed on best of the rest to round off the Trifecta.