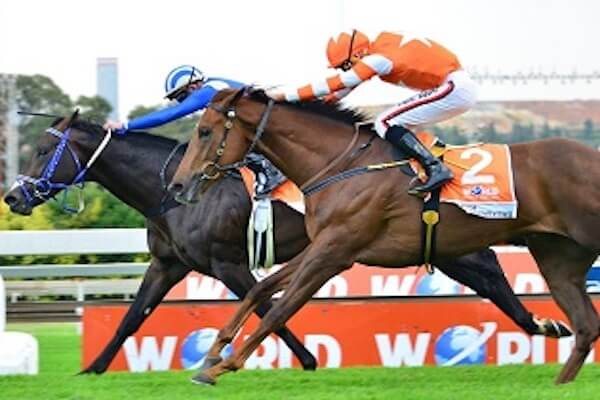 Classics will be classic

The favourites dominated the finishes of both the WSB Gauteng Guineas and the Wilgerbosdrift Gauteng Fillies Guineas at Turffontein on Saturday.

Both were Grade 2 races run over 1600m on the Standside track.

The two results indicated that the upcoming Grade 1 WSB SA Classic and Wilgerbosdrift SA Fillies Classic, both over 1800m at the same venue on Saturday 6 March, are guaranteed to be thrillers.

Mike de Kock-trained Malmoos (22-10) showed no ill-effects from his trip to and from Cape Town and proved to be too good in the WSB Gauteng Guineas. He was well placed in second spot, grabbed the lead early in the straight and then fought off fast-finishing Catch Twentytwo (3-1) to win by by a neck.

“Malmoos doesn’t mind a scrap in a finish,” said De Kock on his website, www.mikedekockracing.com. “He enjoys fighting and likes to do just enough to win. We’re pleased with the way he ran because we left something on him to work on. He will improve going into the Classic.”

With that reference to the second leg of the WSB SA Triple Crown, De Kock confirmed a rematch with Catch Twentytwo is likely to be on the cards and said: “I think it will be a good race. Catch Twentytwo was gaining late, but I was watching them just past the line and Malmoos kept him at bay.”

He added: “I’d like to see Malmoos come from a few lengths off the pace to run at his rivals. The way things have happened, he’s found himself leading or handy every time. We’ve always believed he’ll be better over further than a mile, and the Classic will show us.”