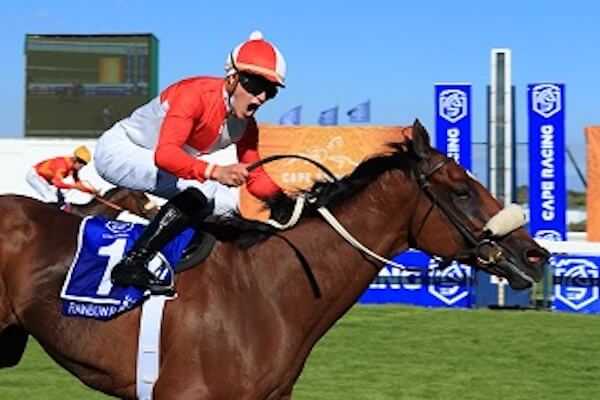 Rainbow Bridge continued his excellent record in the race when he captured the Grade 1 Cape Town Met for the second time in three years.

Under a superb and patient ride from Luke Ferraris, Eric Sands-trained Rainbow Bridge came from last to get the better of favourite Belgarion close home and won going away by 1.75 lengths.

Third place went to outsider Sovereign Spirit, another 2.25 lengths back, with Do It Again in fourth, another 0.50 lengths back in fourth.

Rainbow Bridge started at 6-1 while Belgarion went off favourite at 19-10.

The six-year-old son of Ideal World out of that brilliant broodmare Halfway to Heaven, won this race in 2019 and was runner-up last year to One World. He is owned by Mike and Norma Rattray.

There was a fight on for the lead after they broke but eventually it was Gavin Lerena on Cirillo who got to the front from Running Brave and Silver Operator, while the back three were Do It Again, Belgarion and Rainbow Bridge.

Once the field came for home, three-year-old Princess Calla moved in for the kill while Sovereign Spirit, the biggest outsider in the field, started to make up ground on the fence. With 250m to run Richard Fourie brought Belgarion on the scene and he raced into the lead, looking the likely winner. But once Ferraris got his mount in the clear towards the outside, Rainbow Bridge took off and easily caught Belgarion.