Belgarion, victor last year of the famous Vodacom Durban July, is the bookies’ favourite at 22/10 to win the race that is so deeply lodged in the South African public’s consciousness, the iconic “Met.” This 2000m event with a proud history, will be staged at Kenilworth on Saturday, together with other prestigious G1 contests, the 1000m Cape Flying Championships (WFA) for specialist speed merchants, and the Majorca Stakes (WFA) which has attracted a cast of fine fillies and mares over 1600m.

Belgarion forms part of a three- pronged attack trained by dominant local conditioner, Justin Snaith, (dual Durban July winner Do It Again and 2017 Winter Series star, African Night Sky are stable companions) and seems teed up for a peak performance. He was hugely impressive when defeating re-opposing Rainbow Bridge and Cirillo in the Green Point Stakes in mid-December, then hardly shamed when clocking in third at odds on in a falsely paced, L’Ormarins Queen’s Plate. The Cape Town Met distance suits this proven winner better, he has competed with distinction against top- class rivals already and as a lightly campaigned five year-old can move forward towards another peak showing at only his 12 start.

Queen Supreme looms a threat as she has repeatedly dismissed the best of her female contemporaries whilst also badly scaring outstanding colts like overseas-bound stable mate, Hawwaam. Mike de Kock’s runner was a stylish winner of the G1 Paddock Stakes at Kenilworth three weeks ago and with further improvement expected, this Irish bred mare potentially has the natural ability to menace Belgarion.

Eric Sands presents two principal contenders, Rainbow Bridge (close 2nd to One World in the 2020 Met) and Golden Ducat, who share the same prolific producing dam, Halfway to Heaven. They fought out a humdinger in the Champions Stakes in August 2019 to showcase their merits, though both finished a couple of lengths off Belgarion in the July. Rainbow Bridge is now significantly better off at the weight turnaround with the favourite however, whilst Golden Ducat is a tough scrapper bound to have progressed since the Durban winter season, so they should be accorded proper respect.

The sole three year-old filly, Princess Calla is interesting. There was honour in defeat 2.3 lengths off Queen Supreme in the Paddock Stakes in only her fifth career try and she finished the same distance behind arguably the best of the three year-old crop, Captain’s Ransom in the Fillies Guineas. That is strong form to put on her CV. Adam Marcus saddles her, carrying just 51.5kg’s – the mercurial services of excellent jock Grant van Niekerk is an added bonus.

Do It Again has drawn a blank since his July heroics in 2019, the same year he was only just run out of it in the Met by perennial rival, Rainbow Bridge. The six year-old may not have won for 574 days, yet cannot be written off as he usually runs big second up after a break and there was much to like about his brisk finish from the back in the L’Ormarins Queen’s Plate. The occasionally grumpy veteran now gets cheek pieces to enhance his concentration.

Silver Operator is trained by Vaughan Marshall who has won this race three times in the past with La Fabulous, Hill Fifty Four and One World. He saddles long shot, Silver Operator who clashed with Belgarion earlier in their respective careers and was only beaten three quarters of a length, admittedly when receiving 6kg’s in weight. It might be that the market is mistakenly underestimating him as a seemingly forlorn 50/1 outsider, given that he’s stepping up in trip for the first time, which should be fine based on his pedigree (by Silvano). Silver Operator also has scope to develop having only raced eight times.

Cirillo is another trying a longer route. Sean Tarry’s entry was only lumbered in deep stretch in the Green Point over 1600m and suffered a similarly narrow reverse to Golden Ducat and Rainbow Bridge in the Champions at Greyville in August over 1800m. On that basis it would be foolish to dismiss this 33/1 longshot as a no-hoper, especially if the early fractions are not too testing and he can employ optimal stalk and pounce tactics on a dry surface.

African Night Sky suffered an excruciating beat when stopped dead in his tracks on the rail in the Premiers. But for that traffic melee, he probably would have swept past Golden Ducat. Dedicated horseman, Snaith is trying to work miracles in bringing this seven year- old back from serious injury, towards the tremendous form he displayed when winning the Winter Series of 2017. The ante post market is somewhat leery of his prospects however and pegs African Night Sky as a 20/1 chance which translates into a mere 5% chance of winning.

Running Brave is a front running invader from Joburg that will be a significant pace factor. A bargain R30 000 buy who has earned close to R2 million in stakes, she will again run her heart out but could be found wanting when it counts. 100/1 rank outsider, Sovereign Spirit makes up the 11 runner field – he’s finished well adrift of Belgarion and Golden Ducat without obvious excuses, and seems unlikely to trouble the judge.

Though the Met is deeply contentious with plausible cases made for many in the field, the Majorca Stakes (G1) appears clear-cut. It pits up-and-coming star, Captains Ransom (firm even money favourite in early trade) vs defending champ, Clouds Unfold, quoted at 22/10.

They clashed in the Diana Stakes in October 2020 with Captains Ransom actually out-finishing the mare which is a rare achievement in itself given that Clouds Unfold’s swift turn of foot has propelled her to nine stirring victories against the best sprinter/milers in the business. There is unlikely to be much between them this time either, but the youngster, who can sit handy from a low draw then quicken up dramatically, is preferred.

Chat Ching is about four lengths inferior to the selection on exposed form, so is unlikely to win, yet can clunk up for a place. Pace forcing, Silvano’s Pride, and Brett Crawford’s representatives, Pretty Young Thing and Sing Out Loud are others that might reasonably be used underneath in trifecta and quartet plays.

The Cape Flying Championship (G1) is dastardly difficult to decipher. It’s a very powerful line-up of brilliant sprinters all rated within a few ticks of each other – whoever is in the sharpest physical condition on the day and gets the right split-second breaks will prevail.

Compiling a contender short list with any confidence is an awkward task given how clustered they are on ability ratings: Run Fox Run, Celtic Sea, Rio Querari, Kasimir, Russet Air, Erik the Red and Vernichey could, perhaps, be the ones to fight it out.

6/1 shot, Run Fox Run and 5/2 ante post favourite Celtic Sea have engaged in spirited G1 sprint duels before and have proven credentials at the higher echelons over the short cuts; upwardly mobile, Rio Querari has been mighty impressive this Cape Summer; add fellow Snaith trained runners, Erik The Red (Merchants victor) and experienced champion sprinter, Kasimir as formidable foes with excellent winning records; Russet Air won the Flying Champs in 2020 with a surging closing sectional and is 7/1 to repeat, whilst well-travelled, Vernichey may be 20/1 yet is respected as a low weight representing the three year- old fillies crop. These seven thoroughbreds have between them won 48 races, including multiple G1 and G2 Stakes’. A fascinating, quality showdown!

With an estimated R15 million P6 pool on the big day, exotic bettors chasing a life changing score may need to spread wide to ensure they advance past this leg. There will also be two Jackpots (Race 5 – Race 8 and Race 9 -Race 12) plus two Bipots (Race 2 through Race 7 and from Race 7 to Race 12) challenging punters, together with the familiar menu of single race exotics across a captivating 12 race card.

Punters eager to have a fixed odds strike could be tempted by constantly improving gelding, Pinkerton offered at around 7/2 in Race 4, and promising stayer, Silver Host, who elicited high praise from trainer Snaith after his last eye-catching victory. Silver Host is priced up at 13/10 in Race 10 – those odds are a tiny bit skinny, so hooking him up in doubles and multiples with other fancies across the card could prove nourishing. 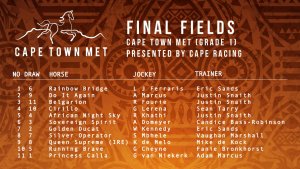