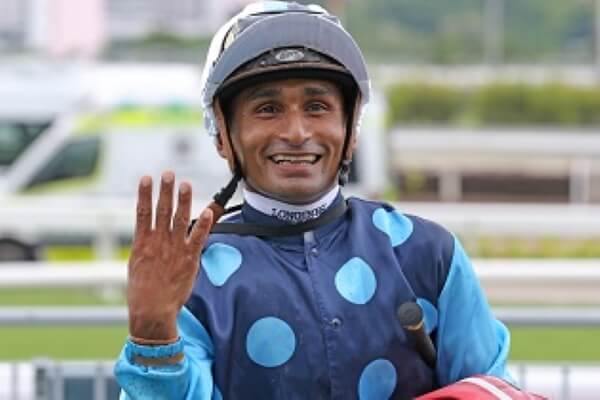 Karis Teetan continued his strong start to the 2020/21 racing season with a winning treble at Sha Tin on Sunday which was completed with victory aboard impressive juvenile, Lucky Express in the Class 2 Hwamei Handicap over 1200m.

Although winless at the two previous meetings, Teetan had already bagged eight wins and today added three more to skip into second on the jockeys’ premiership table.

“You never know coming into the day – I thought I had ok rides but it’s nice after two meetings blank to bounce back with a treble – especially on some nice horses,” Teetan said.

Teetan wrapped up his three-timer with a barnstorming victory aboard Lucky Express, the Toronado gelding rattling over the top to score by 0.75 lengths but Teetan didn’t expect to have a ride in the race, let alone partner the winner.

“I had no ride in the race so when Mr Size sent me a message, I confirmed it straight away,” Teetan said, “the way he was running last season he looked like he was going to get better and I appreciate Mr Size’s support – it’s nice to sit on a horse like that.”

The Australian-bred arrived in Hong Kong with two wins from three starts in Australia, amassing an eye-catching AU$681,250 in the process (approx. HK$3.8 million) when previously known as Prince Of Sussex.