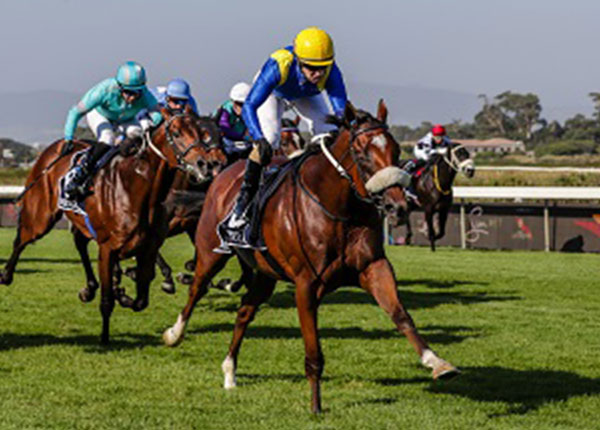 Former Equus Champion Sprinter, Captain Of All, a son of the late, champion sire Captain Al, has made a pleasing start to his stud career and the triple G1 winner got off the mark as a sire when his daughter What You Are won at the Vaal on Tuesday.

Trained by Tobie Spies, the Terry Andrews bred What You Are stormed home to land a maiden juvenile plate for fillies over 1000m in tremendous fashion.
The filly, who had been third in each of her two prior starts, drew clear under jockey Muzi Yeni to shed her maiden by an emphatic one and a half lengths.

Her sire Captain Of All had had just a handful of runners thus far, but already three of his first crop, now two, have either won or finished in the money.

Bred by the Riverton Stud, Captain Of All was a superb athlete who was crowned South Africa’s Champion Sprinter of 2014-2015. The handsome bay won or placed in 11 of his 12 outings, for earnings well over R2 000 000, with Captain Of All’s principal victories including the 2013G1 Tsogo Sun Medallion, 2015 G1 Tsogo Sun Sprint and 2015 G1 Mercury Sprint (where the champion thrashed the likes of Carry On Alice (also by Captain Al) and Horse Of The Year Legislate).

Trained by Dennis Drier, the bay won seven times in total with his other scores including the G2 Khaya Stables Diadem Stakes in 2014.

Captain Of All, who stands at Klawervlei Stud in Bonnievale, had yearlings make up to R425 000 at the recent Cape Premier Yearling Sale.